L’ÉCOLE, School of Jewelry Arts will present for the first time, from October 5 to November 30, 2018, the breathtaking collection of men’s rings belonging to Yves Gastou.  The exhibition will showcase  an array of 500 rings ranging from: the rings of 17th century Venice doges, to American biker rings of the 1970s, ancient Egyptian rings to 19th century “memento mori” skull rings, 18th century enameled rings, to rings by contemporary artists….

The desire to show the jewel through all of its facets, to reveal these little-known treasures is at the heart of the missions of L’ÉCOLE:
«Overshadowed by the female pageantry, the male ring finally arrives in the spotlight, with an abundance of creativity that speaks to the eye, to the soul and to the heart»
Marie Vallanet-Delhom, President of L’ÉCOLE, School of Jewelry Arts

Yves Gastou is a key figure in the life of Saint-Germain-des-Prés in Paris, a neighborhood where he has lived and worked as a renowned antique dealer for over thirty
years.

A pioneering antique dealer, he will be the first of his generation to confront the French and Italian furniture of the 40s-50s and 70s with the emblematic pieces from the 80s by artists of the likes of Sottsass, Mendini, to Kuramata.

Yves Gastou has created this collection of rings with accumulation, frenzy, relentlessness and risk-taking within over thirty years, over the course of his usual haggling (in flea markets, public sales, jeweler’s inventory sales, workshops sales), but also from his travels.
Yves Gastou is an artist; as such, his collection is an expression of his creativity.

Rich with more than a thousand rings from varied origins and ages, Yves Gastou’s collection, for all its originality and personality, carries with it the history of collecting which dates back several centuries.

With antique rings from ancient Egypt, rings belonging to 17th century doges or American bikers from the 1970s, the ensemble is as much a collection of ancient times as a modern collection.

At the crossroads of old cabinets and modern collections, Yves Gastou’s men’s rings collection is a testament to the fact that curiosity has lost none of its timeliness or appeal.

Male jewelry always echoes a social, political, economic and artistic reality. Much more than an element of adornment, the masculine jewel also represents an instrument of power assertion, a tool of communication and a fashion accessory.
The function of male jewelry is necessarily affected by societal evolutions as is the relationship between men and coquetry.

It is a collection like no other, because it is exclusively dedicated to men’s rings, and will be unveiled to the public for the first time by L’ÉCOLE, School of Jewelry Arts.

The most emblematic pieces of this collection will be showcased as part of a scenography conceived by interior designer Jérôme Thénot, whose talent will be used to restore the gothico-mystical universe of Yves Gastou.

The choice of rings will be representative of the seven themes of the collection while illustrating its diversity: neoclassical, chivalry, Gothic, religious, vanities, ethnic, oddities. 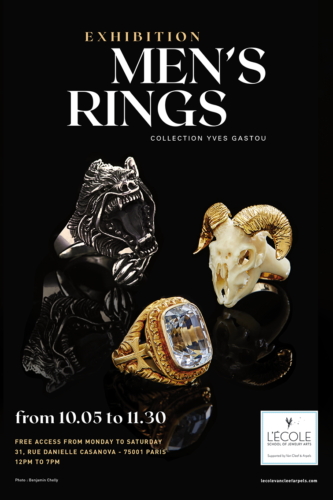 Did you added your own Google API key? Look at the help.

Check in YouTube if the id UCSURUbe7km7Rn0NXkuhXsZw belongs to a channelid. Check the FAQ of the plugin or send error messages to support.