Founded with the support of the Maison Van Cleef & Arpels and based on the Place Vendôme since 2012, L’École, School of Jewelry Arts, offers an à la carte program for adults and children, which consists of workshops, courses and lectures given both in English and in French by a team of 30 expert-teachers: jewelers, designers, mockup artists, art-jewelry historians, gemologists, watchmakers, lacquer artists and enamelers. During these past 6 years, L’École’s mission has been to initiate the public into the behind the scenes inner sanctum of jewelry.

In 2017, a series of new courses join the curriculum offered to all who want to learn: « The Jewel and ‘Grand Feu’ Enamel », « Gouaché Painting for High Jewelry » and « The Engagement Ring: Know and Understand » .

Also, L'École was broadening its horizons via a new cycle of art exhibitions open to the public: « L’École Presents ». In January 2017, the new jewelry and ‘objets d’art’ collection of the multi-talented Harumi Klossowska de Rola will be proudly displayed, then «L’École Presents» celebrated the phenomenal oeuvre of the inimitable Daniel Brush in October 2017.

Museum patronage and academic partnerships are at the very heart of the mission and actions of the L’École. Early 2018, L’École unveils the ongoing project with the Muséum national d’Histoire naturelle de Paris: replicas of the 20 most beautiful historic diamonds sold by Jean-Baptiste Tavernier to King Louis XIV.

During these 6 years, more than 25,000 students from all over the world have benefited from the original educational content of L’École, in Paris, but also abroad. The trips organized by Nomadic L’École in Tokyo, in Hong Kong, New York, Dubai or London have also made it possible to extend the offer of education to an ever larger student population. In 2018, this traveling school will return to New York.

L’Ecole Van Cleef & Arpels is located at the heart of Paris’ Place Vendôme, in an 18th century mansion representative of French decorative art. 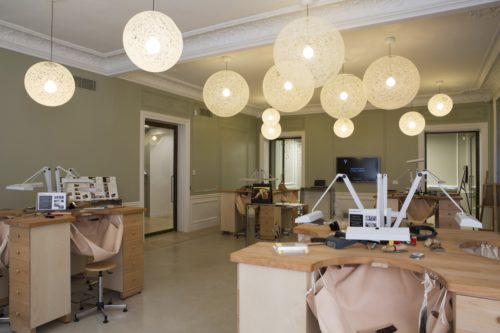