The Fabulous Destiny of Tavernier’s Diamonds, From the Great Mogul to the Sun King

Although nobody can say what has become of them, everyone knows how magnificent they were. Abraham Bosse, who executed an engraved portrait of the diamonds in 1670, refers to them using a simple but explicit superlative: “the most beautiful”.

This is the story of the diamonds acquired by Louis XIV from the travelling merchant Jean-Baptiste Tavernier (1605-1689) in 1668, told through the exhibition organized by L’École, School of Jewelry Arts, with the support of Van Cleef & Arpels.
A fabulous story based on a journey from the Mogul Empire of India and the diamond mines of Golkonda to France under the reign of the Sun King and the Château de Versailles, a journey made along the trade routes connecting East to West.

Amongst the several thousand diamonds brought from India by Tavernier and offered to the Sun King in 1668, twenty stood out for their breathtaking beauty.
They all disappeared in the 19th century, with the exception of the Blue Diamond, but are brought back to life here through the exhibition.

The reproduction of these twenty exceptional stones—revealed here for the first time— is the fruit of a scientific collaboration between François Farges, Professor of Mineralogy at the Muséum national d’histoire naturelle ; Patrick Dubuc, Master Gem Cutter, and L’École, School of Jewelry Arts.
Such a result would not have been possible without this multidisciplinary approach, combining archival research, ancient images and the use of some of today’s most cutting-edge technology.
A broad-based vision of knowledge is one of the core values at L’École, School of Jewelry Arts.

Established in 2012, the school initiates the public into the savoir faire of jewelry making techniques, the world of precious stones, and the history of jewelry through the various classes, conferences and exhibitions on offer, both in Paris and around the world.
By supporting research and enabling the reproduction of the ‘twenty most beautiful diamonds’ that once belonged to Louis XIV, the school confirms its desire to contribute not only to the dissemination of jewelry culture, but also to the transmission of knowledge and expertise.
The presentation of these diamond replicas is an important occasion for several reasons. Firstly, the exhibition reveals the Mughal cut of the 17th century, eclipsed by the European cut and since forgotten : it highlights their beauty, uniqueness and distinguishing characteristics. It also allows us to understand Louis XIV’s fascination with the exceptional splendor of these stones, of which he became the owner in late 1668.
Finally the exhibition illustrates the relationship that were being forged at that time between East and West, in a Europe with a passion for foreign and exotic cultures.

The exhibition at L’École, School of Jewelry Arts takes the visitor on a journey to the world of diamonds and to an epoch of cultural exchange. A tireless traveler, ahead of his time, Tavernier could well have provided an answer to Victor Hugo’s question: “Traveler, what do you want?” “I want to see”.
The exhibition and the accompanying catalogue allow the public to discover the splendor of these twenty lost diamonds, which were amongst some of the most beautiful ever acquired by Louis XIV.

Permanent exhibition. Free entrance from January 23 to 31, 2018, then by appointment
Monday to Fridat, 2PM - 6PM

The exhibition will travel as part of the Nomadic School  : 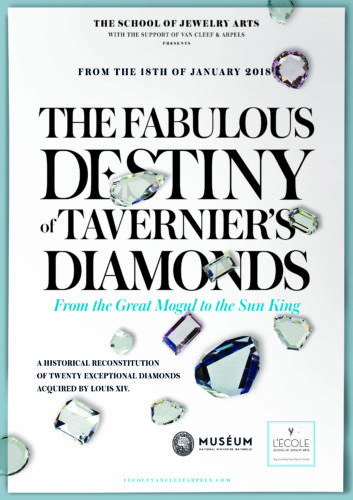